A general-purpose power outlet (GPO)– better known as an electrical powerpoint – should only ever be installed by a qualified electrician. You might be tempted to rewire a socket yourself, or simply take the faceplate off so you can see inside.  However, this can be incredibly dangerous. JTB Electrical will provide an electrician in Brisbane you can rely on to resolve all of your power distribution needs. This applies to both business premises as well as residential properties from Forest Lake to Fortitude Valley. Before asking us to attend to your powerpoints, what should you know? 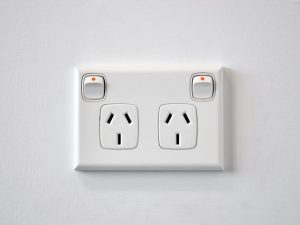 In Australia, the three-pin system is used which means devices are earthed when they are connected to a socket. In other words, they don’t just make a connection to the live and neutral wires of a power distribution system. Much of the rest of the world uses a two-pin system instead. The one we use is the same as you will find in New Zealand, Argentina and Fiji. The UK uses a three-pin system, too, but theirs is much bulkier. The idea of having three pins to make a connection is that it is safer. However, don’t let that fool you into thinking that a three-pin electrical powerpoint will never arc (make a spark) and potentially give you a shock if it is faulty. Care should always be taken.

In older homes, you may still only see single power outlets installed. In new builds, it is the norm for double gang outlets to be installed since there is a greater demand for electrical appliances today. Changing old sockets for double outlets so they can cater for more appliances to be plugged in safely is a typical reason for us to fit new ones in homes around Brisbane. In addition, sometimes powerpoints crack or discolour with age, so we replace them when our clients want an updated look.

We also regularly install powerpoints which include USB connections. These are convenient because they allow devices to be trickle charged from the USB port while the power outlets beneath them remain available for other appliances. Finally, the other type of electrical powerpoint we commonly install are exterior outlets. These come with the necessary ingress protection (IP) rating that makes them safe to use outdoors.

Why Change an Electrical Powerpoint?

If you are rewiring your home because the insulation of your cables is starting to perish, then installing new power outlets at the same time makes a lot of sense. Sometimes, solid walls will need to be chased out to provide access for new cables.  So the best time to have new sockets installed is when this sort of work is being carried out.  With the majority of homes in Queensland being of timber construction, rather than solid wall, this is rarely an issue.

Remember, too, that power outlets don’t last forever. Those that have been knocked into can become loose.  And some are no longer up to scratch simply because they are used so often. Whatever the cause, dangerous wiring can become exposed. Even worse, faulty sockets might overheat which could potentially cause a fire to break out with all of the damage and consequences that would entail.